I am getting ready to leave for my grandparents for the next couple of days. Not only do I have two days off in a row, I get to see my rellies and stuff myself full of good food. Life is good.
Posted by Michelle at 8:58 AM No comments: Links to this post

I love "Ugly Betty!" I know it's been on for a year, but I just recently got into the show. I missed last season because I had to watch the last season of "The OC." Now, with "the OC" gone, I can watch Ugly Betty. Although, it's not as good as "the OC," it's better than most of the other crap on television. I love the comedic timing and the fashions. Especially Betty's style. It's much cooler and stylish than the critics have made it out to be. The show's funny. It's dramatic. I love the over the top telenovela drama. I'll have to catch up on Season 1.
Posted by Michelle at 9:58 AM No comments: Links to this post nataliedee.com
I am so excited for Thanksgiving. It is my favorite holiday. Mainly because it's one of the least commercial of all holidays. Oh, and the food. It's the one day of the year where I can eat my weight in cranberries, mashed potatoes, dressing, and turkey. This year I am excited that I have Weds. off and I don't work until 5 on Friday. My Dad thinks this means that I can partake in the Black Friday shopping craziness. I am hoping to avoid that. The only exception might be an amazing deal at JCP. That is my only exception. It would seriously have to be Fire Sale prices, though.
Posted by Michelle at 9:12 AM No comments: Links to this post

I am so excited that Project Runway is back! I love that show! This season looks like it will be good. I like that the contestants are slightly older and have more real world experience. Plus, they seem slightly crazier than usual. And that's always good. I thought Elisa should've been auf'd. Seriously, that train was so poorly made and out of control. I guess she squeaked by because the dress was well-made. And Simone's was all-around bad news bears.
Posted by Michelle at 4:57 PM No comments: Links to this post

Today I finally had a "real" day off. I decided to check out the Frida Khalo exhibit at the Walker. It was awesome. I have loved Frida since I was in high school and I learned about her in Spanish class. As a teenager, I was drawn to the bright colors and how she wasn't afraid to expose very personal feelings and emotions with a public audience. Plus, as an angst filled teen, I was drawn to her tragic life. Frida was such a strong woman, too. She really challenged women's roles in the early 20th century. Today seeing those same pictures in person was such a powerful experience. It's hard to explain, but when you look at her paintings you literally see the pain and suffering that she endured. It was amazing. Such beautiful works. I love "Los Dos Fridas" (the two Fridas). It is the biggest painting in the collection and just shows so much of her pain. I liked that there were some of her lesser known works like her still lifes and small self-portraits.

The only downside was not the paintings themselves, but the screaming children that were there. I purposely went early (11:30-ish) so I didn't have to deal with the crowds. I am sort of snobbish with my appreciation of art. I like it when it's quiet and not so crowded, so I can spend as much time as I want taking in a painting. It wasn't that crowded, but the moms were there with their screaming kids. I totally understand why, too. Two and three years olds don't have the patience for something like that. At least no one was yelling into a cell phone or being too disrespectful.

Anyways, this exhibit is worth checking out. It runs until January 20th.
Posted by Michelle at 4:02 PM No comments: Links to this post

No, I am not going to blog about Mary J. Blige's album, "the Breakthrough;" (although, it is a good cd) I had a breakthrough with my screenplay today! For the first time in months I worked on it and I feel like it's moving in a direction that is workable and more realistic for me. I don't know what inspired me, but I am hoping I can keep up the momentum. I spent about an hour working on it and it has a completely different direction and focus. I've got rough ideas for the three acts. So excited. For the past three years, this has been the one project that has helped me to keep my sanity. It was really stressing me out that I had this huge writer's block that I couldn't kick. And that is not what writing should be. It's my therapy. It's what makes me happy. Hopefully, I can continue this momentum.
Posted by Michelle at 8:44 PM No comments: Links to this post

Free to a Good Home: My Favorite Coat 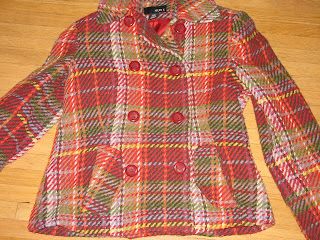 It's time for me to part with my favorite coat of all time. This photo doesn't really do it justice. It's free to whoever wants it. The coat is from JCP (yes, they do have stylish clothes every once in a while). and is two years old. It's a size small, although it runs a little on the big side. It's more of a misses fit than a juniors fit. The fit is pretty boxy and sits right at the waist. The coat is made of 50% wool, 20% acrylic, 20% polyester, and 10% nylon. The coat is in very good condition, even though I pretty much lived in this coat . The coat isn't really heavy, but it's perfect for fall or a Global Warming winter.

You're probably wondering why I'm getting rid of my most favorite coat of all time. It's time to move on. The coat doesn't fit as well as I would like it and it doesn't look as cute on me as it used to. I went through a period of total denial, but I decided that it should go to a good home. Someone else should enjoy my coat. Farewell favorite coat. Sniff. You will be missed.

Posted by Michelle at 6:39 PM 2 comments: Links to this post

This cartoon really made me laugh. It made me think of my dad. Growing up, I always wanted to learn how to use tools and fix cars . My dad's response: "Find a guy to help you." Thanks, dad. Thanks for setting women back 75 years. We really appreciate it. I remember the Christmas I asked for a tool set. My dad wanted to know why I needed that. Uh....to fix things. I am really surprised that I didn't get a pink tool kit. Most of my home improvement skills, I have picked up on my own. It's really good that I'm stubborn. And that my mom taught me how to be feisty and sassy. That helps, too.
Posted by Michelle at 10:08 AM No comments: Links to this post

Lately I've gotten into a bit of a rut. I go to work and come home and that's about all I do. I've been working quite a bit lately and that seems to have zapped all of my creative juices. My screenplay? I haven't looked at it in months. This has made me incredibly restless. I need some sort of change. I need to find a way to write again. Aside from blogging, I haven't done any writing. Writing is truly what I love to do. I've always done it. Ever since I can remember. I need to find some way to have an outlet for my writing. I would love to do freelance writing for a magazine. I've been looking for something like this, but I haven't found much. I feel like I've lost my passion for writing. I wish I could go back to my college years. I had so much passion for writing and I was still a bit of dreamer. Now, I find myself being way more practical. Almost too practical. -SIGH- I need to get myself out of this funk.
Posted by Michelle at 9:56 AM No comments: Links to this post

Tonight I went to the Dia de los Muertos (Day of the Dead, for the non Spanish speakers) show at Altered Esthetics. It was wonderful. And totally just what I needed. I've had a long week and I didn't get to do anything for Halloween, which bummed me out because I love Halloween. This, though was a much better way to celebrate. I've loved Dia de los Muertos since I was 12 and I learned about it in Spanish class. As I've mentioned before, what I like about this holiday is that you celebrate someone's life and not their death. In Mexico, people build an alter on their loved ones' graves and bring ofrendas (offerings) of their favorite foods and posessions. They put marigolds on their graves, as well. Vendors sell sugar skulls and dancing skeletons. It is such a beautiful way to remember your loved ones. This just makes sense. I don't think our loved ones would want us to be suffering because they are gone. Since my mom's death, Dia de los Muertos, has taken on more personal meaning for me. I look forward to it each year and usually use it as a day for quiet reflection of memories of my mom. So, tonight, it just really seemed appropriate for me to go to an opening of a Dia de los Muertos show since the anniversary of my mom's death was this past week. I haven't had much time for any sort of reflection, which was slowly eating away at me.

The artwork was great, a wide variety of interpretations of Dia de los Muertos. For me, the most powerful was the alter that someone had built for a loved one. It was just very touching. I felt like I knew this woman. Lots of bright colored paintings of skulls and flowers. The photography of Mexican Dia de los Muertos celebrations were cool, too. There was also pan de los muertos (bread of the dead), which is bread that is shaped into a skull. I haven't had it in years. Probably since high school Spanish. It is such a good mix of sweet and plain (I'm not describing it very well). The gallery was decorated with marigolds and tissue paper flowers that added to the affect. There was also a candle light procession around the block. This is was such a good time for my quiet reflection.

Even though, I've worked through my mom's death, I still need to have my yearly closure of reflecting back on what a great person she was. It is just something I need to do every year. This show gave me the chance to do this and to see that I am not alone in celebrating a loved one's life.

The show is extremely well done and worth taking a look at. It runs through November 29th. I highly recommend it.

Posted by Michelle at 9:29 PM No comments: Links to this post