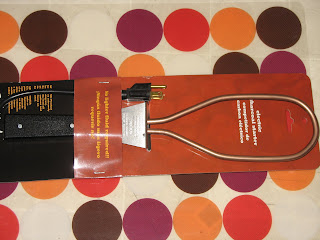 My dad has always been a big supporter of safety. As a kid, my dad had a huge list of items/ activities that might end in loss of limbs or a lawsuit. These included sparklers, home pyrotechnics displays, swimming pools (in his backyard), trampolines, pogo sticks, firearms, skate boards, powder puff football, and pumpkin carving with sharp knives. When I was a teenager, he became obsessed with concert safety and fires. After the Great White fire fiasco, my dad was always asking me about my concert going activities and if I learned where the fire exits were located at the venues. Mosh pits were also a frequent inquiry. He wanted to make sure I wasn't a part of them at shows. He was very concerned with the ventilation systems at venues, as well. His Fourth of July fireworks safety lectures are legendary and can be summed up with "leave the fireworks to the professionals. Don't mess around with that crap!" To this very day, I don't know how to operate a chipper shredder or a snow blower because they are dangerous. I had to wait until I was 12 to learn how to operate the riding lawn mower. That was a huge ordeal with lots of lecturing on safety and using the lawn mower only under his supervision until I was 14.

My dad gave me has trusty Weber grill because "he doesn't want to mess around with that" anymore. There was no fire safety lecture or anything. In fact, he bought me an electric fire starter, so I wouldn't have to use lighter fluid. I thought nothing of the electric fire starter because my dad and my grandpa have used them since the beginning of time. I just assumed they had to be safe, since my dad is Captain Safety. My friend, Steve read the back of the package and discovered that the electric fire starter, aka the Execution Wand or Death Wand heats up to 1000 degrees Fahrenheit! That doesn't sound very safe. I was shocked that my dad would use something like that. On top of it, you can't leave it in the grill for longer than 10 minutes because the Death Wand will melt and might cause an explosion. Yikes! I want nothing to do with it. Where do you put the Execution Wand when you remove it from the grill? On the grass or on the concrete or a plastic patio chair or back in the house? Not to mention we would have to run an extension cord from inside the house to the backyard. I could just see my backyard engulfed in flames or someone (probably me) would trip on the Death Wand and take off a layer of skin or lose a foot. Not a good idea. I think I'll stick with lighter fluid and matches. That is at least self contained and doesn't heat up to hell-like temperatures. The only way I would go near the Execution Wand is with a hazmat suit and four Ove-gloves on my hands. It's just not a good idea. The packaging had a warning to keep it away from children. Only kids? How about everyone?
I think my Dad should have to undergo some safety class after using something as dangerous as the Death Wand. Maybe next year for the 4th of July, I'll buy my dad some fireworks, so he can put on his own display. After all, that can't be as hazardous as the Execution Wand.
Posted by Michelle at 9:57 AM