Too Much Time on the Internet 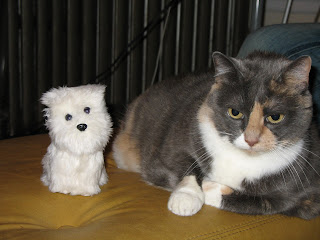 I have to admit that not having the Internet at home for almost nine months has turned me into a bit of an Internet junkie. A good chunk of my time is spent on the web, catching up on what I've missed. Last night I think I reached a new a low for spending too much time on the web: I found a job for my roommate's cat (that's Cleo in the above picture) doing modeling. Yes, that's how you know you've been online for waaaay too long. For about ten minutes, I really got into it. She could make between $50-$125 doing print ads or entertainment. What did I fail to take into consideration? Well, Cleo is ten years old, super sassy, fat, and doesn't really play well with others. My roommate quickly brought me back to reality. Yeah, I had been spending too much time on the Internet when turn to finding employment for a geriatric cat.
Posted by Michelle at 4:02 PM