I'm back from my trip to Milwaukee and Chicago. I have to admit it was hard to come back, I had such a good time. I am really not looking forward to going back to work this afternoon. That is going to be a rude awakening. I did have six days in a row off. Which, in my world is unheard of. Anyways, back to the fun. Here's a picture of the roses from my Dad's awesome garden. 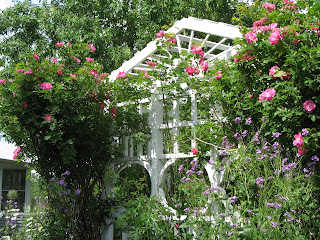 I am always so impressed and amazed by my Dad's garden. It takes up a huge portion of his backyard. And requires so much work. The one thing about Milwaukee I will never miss is the lack of quality radio stations. It is seriously the music void of the Midwest. As I was driving into town, I was listening to New Rock 102.1 and they were playing the same stuff I recall from 12 years ago. Not exactly New Rock. More like Old Rock. I heard local Milwaukee fave, the Gufs song "Smile." It was big when I was in high school. And the Offspring. Sigh.
I took the train down to Chicago. It's so affordable. It only cost me $37 round trip. And it only takes an hour and a half. Not, only did I save gas and time, I saved my sanity. I abhor driving in Chicago. I never would've gotten there in an hour and a half. Maybe three and a half hours. My Dad had to leave me with some words of wisdom before dropping me off at the train. "Remember that Chicago isn't like Minneapolis. It's a big city like New York." Oh my gosh! Really? I thought they were the same. I am so not country. And not stupid. I proved my city-savvy by beating out a woman for a cab at the train station. She tried to talk her way into me letting her have my cab because she had been waiting there longer than I. I don't think so.
Anyways, my friend, Steve and I checked out Millennium park, which very cool. And a huge tourist draw, which you can tell by the people surrounding it. I love how modern it is. Yet, it is odd to see something like this in a city. 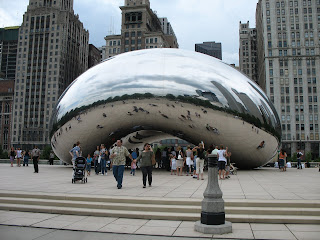 This is the Bean . Sort of trippy. You can walk underneath it, which is even cooler. 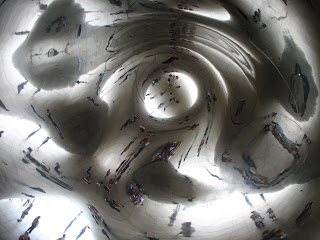 While in Chicago, I did a lot of shopping. The stores there are so much better than here. Even the Old Navy is better. It's bigger and had great displays. It almost didn't look like an Old Navy. Shocking, I know. The highlight, though, had to be the Marc by Marc Jacobs store in Bucktown. I heart Marc Jacobs. His store was really cool. The best part is they carry affordable gifty items that everyone can afford. I bought a rust colored wristlet for only $25. For Marc by Marc Jacobs. This makes up for the fact that I can't afford the super cute dresses that look like Marc designed them with me in mind.
Here is my wristlet, hanging out at the bar (in the safety of the bag). I have to admit that I was pretty obnoxious showing off my bag. But, it's not everyday that I buy Marc Jacobs. 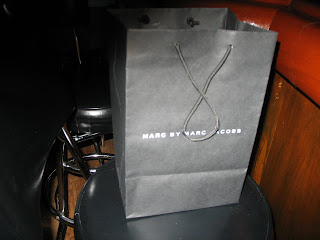 The other cool thing is shoes stores carry an awesome selection of sneakers. Tons and tons of unique Nikes, Pumas, and Converse. I did use my restraint and didn't buy any shoes. Woo-hoo. It was hard, though. I love fun sneakers, but really need to wear the ones I have.
All in all, it was a good vacation. I got to hang out with my friend Steve and catch up with my relatives that I haven't seen in a couple of years. The one thing I didn't do is go to Dunkin' Donuts. I saw a really big one with a Baskin Robbins in it, but I wasn't hungry for a donut. Sad, I know.

Thanks! :) I try. I thought it was pretty cool that there was a lot of inexpensive gifty stuff. There was even a Men's Member's Only inspired jacket for only $28